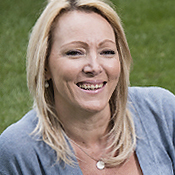 Tracy started smoking at 13 at school. Tracy continued to smoke when she finished high school, but the amount she smoked depended on her mood. Tracy stopped smoking when she was pregnant with her children, but took up the habit again after they were born. In a week she would probably spend about £30 on cigarettes.

“Even if it was just 10 a day it would easily accumulate to that in a week, and of course more at weekends.”

Tracy had her last cigarette on Valentines Day this year.

“You always think you can have just the odd cigarette, or on that odd night out you’ll have a cigarette and you can just not smoke again, but before you know it, it’s crept up and you’re back to where you were.”

Tracy was motivated to quit smoking after her mum was diagnosed with cancer last year. Tracy said she wanted to make sure she could be around for her children and her first grandchild.

“Everyone always thinks its not going to happen to them but it does happen. I just thought no, my health is imperative. From the age of 13 I couldn’t tell you how many times I’ve tried to stop smoking. I think once you’re a smoker, it’s very difficult. When you get to a point in your life when you may lose someone, or you go through a divorce or there’s a bit of stress, the first thing you do is reach for the cigarettes because in your mind you’re convincing yourself that smoking is going to make things better, when in fact it doesn’t”.

Tracy’s four children started smoking at a young age, but only one of them currently smokes.

"My daughter stopped smoking the minute she started trying for a baby, and she hasn’t touched a cigarette since, and luckily she fell pregnant straight away. If she smoked it might have been a lot harder for her.”

Since quitting, Tracy has spent her ‘cigarette money” on treating herself and is happy that her money isn’t just going to go up in smoke.

“Would you just set fire to £30 and watch it burn? No! but every time you light a cigarette you are doing exactly that.”

If you are thinking about quitting, we can offer telephone or video support. Contact us and a friendly advisor will call you to talk through the options in your area.

Fill in a referral form